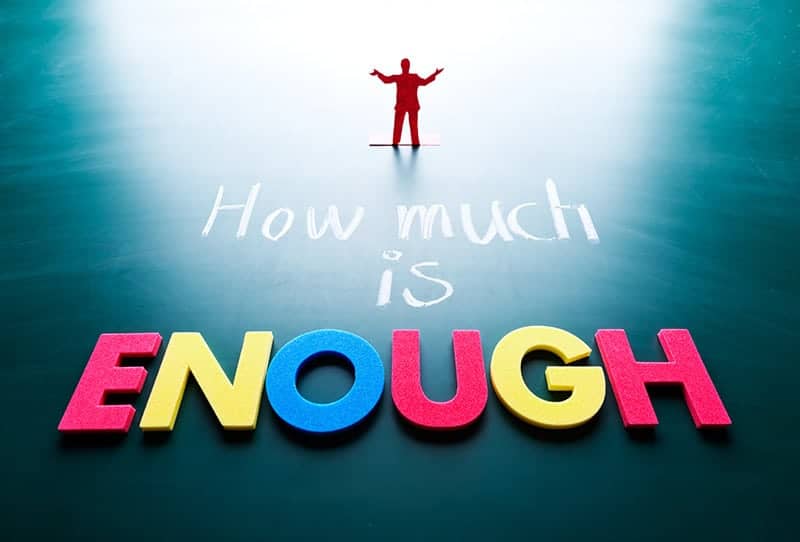 How To Know If Your Number Is Big Enough

Retire As A Physician Without Compromising Your Lifestyle

Do you know how much money will set you free? That is Your Number.  Make sure it is big enough.

Lee Eisenberg provided insight on this in his book, “The Number; What Do You Need for the Rest of Your Life, and What Will It Cost?”

Here I present some of his thoughts on what it means to have “enough money.”

You have enough when you reach “Your Number.” You could then retire without compromising your lifestyle.

How do you determine it? How should you think about it? Does it matter?

1. Obsess all you want about Your Number, but don’t be a sicko.

Most Americans ignore personal finance and retirement planning. They get bored with financial topics and have no interest in learning even the most basic financial facts.

Apparently, they think it is fine to stick your head in the sand. If you don’t think about the future or about retirement, then it will never happen.

This is not a good approach. Even though it is common.

Which of You is the Numbers Nerd?

At the other end of the spectrum is the spreadsheet crowd. They read dozens of finance books and run Monte Carlo analyses on portfolios.

One can do well with a simple approach. Even a back-of-the-envelope calculation would do fine.

If you have a high savings rate and invest in a diversified, low-cost way, you will be fine.

Will Your Number Let You FIRE?

Do you plan to stop working at some point? Are you striving to become financially independent (FI)?

If so, you will need to pick a number or at least a range. Now make a plan to end in that zone.

Do you want to be “comfortable”, “rich” or somewhere in between?

Get that clear in your head early on. That will drive all your other money decisions.

2. Those who say that this is either (a) the Apocalypse or (b) the Golden Age are both wrong.

The talking heads are shouting. Some talk about the “generational storm” that may cause stocks to decline.

Others concern themselves with inflation, deflation, or stagflation. Books that predict a coming economic collapse are perennial bestsellers.

At the other end of the spectrum are the idealistic optimists. Optimists can point to economic and political trends. The slow arch of change points in the direction of progress.

But optimists often have a rosy short-term view. The stock market and the economy do not go upward forever.

3. Living in a college town is no panacea.

Every year or two popular magazines published a list of best places to retire. They tend to focus on smaller towns with a lower cost of living. College towns also rank high.

Although these towns can be fun to visit, realize they are not the best retirement place for everyone.

You may tire of fraternity houses, pizza, and 2 AM noisy parties after a college football win.

Don’t rely on lists such as “best cities to retire in” because there is no absolute list that works for everyone.

We all have our own preferences, values, likes, and dislikes. Lists that ignore these factors are silly.

The best financial advisors are thoughtful and pragmatic. They are confident but do not take themselves too seriously.

Nor try to predict the future with certainty. Beware of “free” steak dinners or riverboat cruises in which you will be “educated.”

The conflicts of interest and lack of transparency are widespread. The push for fiduciary rules is great but doesn’t go far enough.

The Rules are Simple, But Not Easy

5. Those who know better don’t always do better.

Ordinary investors need more knowledge. Those who read The Wall Street Journal, Money, and Kiplinger’s are not smarter with money. They just trade more.

Studies show people tend to have a poor sense of timing. Buying into stocks when they go higher and selling on the way down.

Others gain advice from the daily media and make frequent changes.

Invest At Least As Well as The Dead

A Fidelity study showed most successful investors made good choices early on. They “set it and forget it.”

Then continue to invest. They leave their portfolio alone.

Those who were hands-off or had forgotten about their portfolios did the best. They outperformed active traders.

Even those who had passed away had better-than-average results.

It’s a strange world, isn’t it? When it comes to investing skills, you may do better dead than alive!

I have experienced this. When I received a student loan check in college for several thousand dollars, I felt rich.

When I began making money and passed the $30,000 per year mark, I was rolling in it.

I grew my savings and felt well-off.

Later I studied math on sustainable withdrawal rates (SWR). I realized that even a million-dollars produces only about $40,000 per year.

Thanks to lifestyle inflation, I spend more than three times that.

Few of us feel financially secure. Surveys confirm this.

Surveys asked how much money people would need to feel secure.

The most common answer is “more.”

Your Number Will Creep Higher

You may find that if you calculate “your number” that once you reach that number, it is no longer enough.

This happens to all. Not only shopaholics.

7. The innocent get eaten.

It is amazing to see how financial “professionals” get clients. Hosting a steakhouse dinner meeting boosts their client list.

Others rely on word-of-mouth. Clients have no formal mechanism to assess the quality of the advice coming from their new “money guy.”

I know an orthopedic surgeon who is well past typical “retirement age.” Yet he cannot afford to quit. Investment losses eliminated his freedom.

This surgeon’s “money guy” talked him into silly and complex investments. He relied on trust and did not understand or track his investments.

It is quite sad. Don’t let that be you.

8. It pays to play tricks on yourself.

Build in fudge factors. Plan on an extra 1% or 2% for lifestyle inflation or for extra price inflation.

Crash test financial scenarios. Such as a stock market crash at the worst time.

Run the numbers with a life expectancy of 95 or 100 years old. It is much better to err on the side of having too much late in life.

Better to have too much than worry about running out.

If you have too much you can splurge or give it away.

Is Too Much Money Really a Problem?

The opposite scenario is quite a horror story. Recognize the importance of this asymmetry (having too much versus having too little).

Our focus should be on the unlucky or worst-case scenarios.

Those are what can destroy resources.

Hope for the best, but prepare for the worst.

9. Tricks or no tricks, almost everybody suffers from reference anxiety.

Reference anxiety is alive and well among physicians. We talk to other physicians and compare notes about our lives.

Our peers influence our attitudes and spending habits. All-to-often we assume the “rich doctor” role.

When we look at others, we assume we can tell how much money they have.

All we can estimate is how much they spend.

Net worth is one of the more hidden financial numbers.

Keeping up With Dr. Jonses

We should feel sorry for those who overspend. Instead, we get jealous. This is human nature.

Doctors are most comfortable in upper-middle-class circles. Remind your self that you are in the economic stratosphere.

Spend time with people in the middle and lower classes. Those folks are all around you.

Get to know them at work or through volunteering.

It builds perspective. And helps us stay grateful.

Money Can Buy Some Happiness When You’re Broke

I felt the impact of monetary comparisons. When I was a destitute youth, even a little money increased my joy.

As my income grew, each extra dollar added little. I reached a plateau.

Beyond that point adding income or assets had no effect on my happiness.

For example, I was at the lower end of income when in private practice. My comparison peers were partners who owned McMansions, planes, and even a hotel.

I felt much poorer than all these folks.

When working in academia I made two thirds less money than in my private practice. Still, I felt flush with resources.

Rich Compared to a Medical Student

In my day-to-day life, I spent time around patients from a lower socioeconomic status. Absent-minded professors never talked about money.

Neither did the struggling residents and “starving students.”

By comparison, I enjoyed my high salary. My assets produced cash too.

I felt grateful for all I had. Beware of your peer comparisons.

10. Practicing “financial correctness” is a huge waste of energy and time.

Try not to get too hung up on the current popular thinking. Some feel that only a sucker would continue working past “retirement age.”

Others feel quitting a helping profession like medicine at an early age is unethical.

Some feel that having a goal of becoming a millionaire is unrealistic or greedy.

Who Wants to Become a Millionaire?

Others realize they must cut their standard of living to retire on anything less than $3 million.

We all must make these decisions for ourselves. I don’t know anyone who found their number to go down!

Just make sure you are in a green wealth zone.

Do you currently have “your number” in mind?

Has it changed over the years? Has it gone down or up?