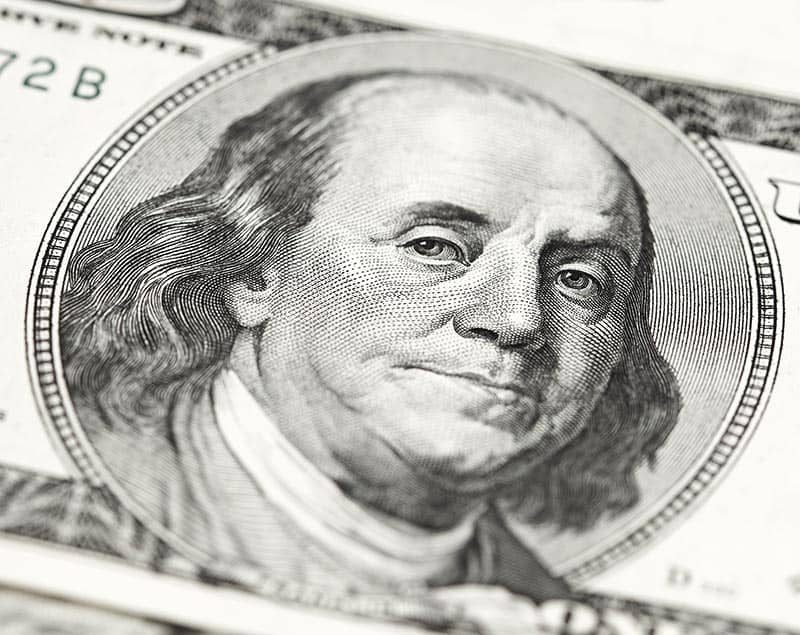 Ben Franklin was arguably the first Financial Independence & Retire Early (FIRE) “blogger.” His almanac and pamphlets were the blogs of his day.  He was a truly self-made man who was eager to share his timeless wisdom.

It is hard to overemphasize the lasting impact of this one man.  He was a scientist, businessman, philosopher, inventor,  humanitarian, and politician. Today’s post spotlights his financial advice and experience with Financial Independence (FI).  He was an early example of how one can retire early.  After building his reputation and printing business he retired early to pursue other interests.

His many ‘side gigs’ (e.g. Poor Richard’s Almanack) helped grow his wealth rapidly. He turned over his business to a partner at the ripe old age of 42.  Although he did not become inactive, he no longer needed to work for money.  He had reached FI.

He created wealth through multiple ‘side gigs’: private business, franchising, marketing, publishing, networking, and exploiting new technologies.  These are the same approaches that work well today and are emphasized at conferences like FinCon.  He continued to reinvest his profits into his businesses and into real estate (property in Philadelphia).  He noted that making money seemed to get easier over time.

“After getting the first ‘100 pounds’ it is easier to get the second.“

Some now say, “The first million is the hardest!”  Accumulating money was not his primary goal.  Despite his extraordinary financial success, he didn’t have the soul of an acquisitive capitalist.  He thought it better for people to say “He lived usefully” rather than “He died rich.”  Once he reached Financial Independence he saw no reason to keep plying his trade to make even more.

He struck an agreement with his printing business partner, David Hall.  Ben would step down from all day to day operations of the press.  David would pay Ben 50% of the profits (650 pounds annually) for the next 18 years. Since common clerks at that time made 25 pounds a year, his passive income would now be equivalent to several hundred thousand dollars.

Financial Independence and the Freedom it Brings

Financial Independence & Retiring Early (FIRE) freed him up to get more involved in science experiments and politics.  There was now plenty of time for things other than work and he had a lot of interests.  Some of them were reading, studying, learning, and conversing with friends.  He wanted time for travel, to conduct science experiments, and to get more involved in politics and humanitarian work.  He had a lot to retire to, not just something to retire from.

The governor of Pennsylvania offered him a patent and a lucrative business arrangement based on his “Franklin stove.”  Franklin turned down the opportunity.  Giving away the technology was nobler in his view.  He felt indebted to others who created prior inventions and he wanted to give back.  Besides, he didn’t really need the money.  Or so he thought.

So how did things go for him when he got closer to a modern retirement age?  Well, not so hot actually.  When Franklin turned 60 years old his financial agreement ended.  He still had other passive income (interest, dividends, and rent from real estate) but it wasn’t enough to maintain his lifestyle. Despite his reputation (from his Poor Richard days) of being thrifty, he had grown accustomed to some of the finer things in life.  His new life included kegs of premium beer, nice clothes, travel, and dinner parties.  Who could blame him after all he did for our country and for humanity?

It was a shock when his income dropped at age 60.  He explained to his wife, Debra, that when one’s income drops the outgo must drop as well.  Otherwise, destitution is where they would be heading.  Their investment income would support them, but not at the level they were used to.  He told his wife that they both needed to cut back on spending.  They also had to cut back on their daughter’s upcoming wedding.  He wrote with a tone of fear and desperation.

It was a sad struggle of an aging man.  He even tried to extort money out of his old partner.  He threatened to compete against their own printing house unless Mr. Hall continued to pay out some of the profits to him.  When Mr. Hall balked at this, Franklin pointed out that the contract had ended and there was nothing that prevented him from competing.

One wonders if Ben had regrets at that point?  Did he regret not continuing to build businesses or not making the business contract longer?  Was turning down the financial opportunities along the way (e.g. the Franklin stove) a mistake?  He wasn’t one to share his inner doubts and turmoil so we will never know.  Nevertheless, he seemed a bit blindsided by the drop in income even though it was 18 years in the making.  Despite this rather sad disruption of his financial independence, his early advice on money is worthy of our study.

From this, I drew a conclusion: Beware of future expenses.  When we retire early we may underestimate our future costs.  These increase from inflation and “lifestyle creep.”

Benjamin Franklin is one of the most quoted people on the planet.  One quote that is virtually always misquoted is, “A penny saved is a penny earned.”  Modern authors/bloggers criticize this saying since saving is better than a 1-to-1 deal.  That wasn’t the way I remembered the quote so I looked it up.  Here it is, “A penny saved is TWOPENCE clear…”  So even before there were income taxes, Ben understood that you could reach your goals better by cutting costs and saving money than by out-earning your problems.

After looking this up, I learned several of his other valuable quotes.  Here are a few of my favorites.

Work on Yourself Before Blaming Others

Cherish Your Time Off

Focus on Saving not Spending

Avoid Keeping up with The Joneses

If you like this post you will love Franklin’s own books: The Way to Wealth & his Autobiography (the most popular autobiography in the world).  I also recommend Walter Isaacson’s biography of Franklin.

We can’t all be Ben Franklin, but maybe we can learn from his advice and life-choices.  What do you think?  Did he make the right decision to retire early?  Do you find inspiration in his life story?