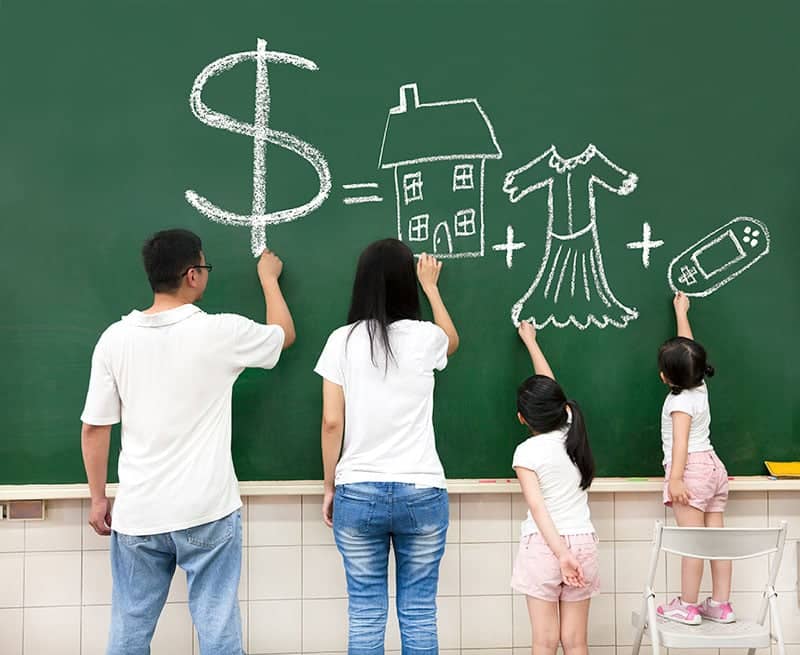 Dad, Are We Rich?

How Rich is Rich?

A lot of us have a “Number” in mind that would provide financial freedom. It varies a lot from person to person. It raises the question, “how rich is rich?” This issue was addressed in Edward O. Thorp’s excellent book, A Man for All Markets.

What do you think of these now? They may still be useful, relevant cutoffs. Of course, inflation has slashed the real buying power of the dollar. Based on inflation adjustments these would be six times larger:

Or we could look at the Dinesh D’Souza wealth version that Thorp adjusted for inflation:

Or his version based on income:

Getting Rich in America

It struck me as I reviewed these that I started out “poor.” I went to college and became “lower-middle” class based on income & wealth. In residency, I was “middle” class.

As an attending physician, I became solidly “upper-middle” class. Most physicians should be able to reach “upper-middle” income & wealth levels by middle or late-middle career.  As my example illustrates, this is achievable even when starting from poverty.  Almost none, however, will reach “rich” or “superrich” unless they access some other non-clinical cash pipeline (e.g. startup investing, T.V. show on the Oprah Network, patents, large real estate projects, etc.).

Doctors Can Get $1M

A household wealth level at the 97.5 percentile ($1.36M) is achievable for the average U.S. physician. That’s the good news. It is even achievable for a lower income worker who diligently saves and invests. For example, due to the miracle of compounding, 100K growing at 8% becomes 1M over three decades.

But a Million Isn’t That Much

The bad news is that 1M isn’t what it used to be. It would take 20M to match the buying power of 1M from a century ago. Using the popular “4% rule” 1M would generate 40K per year before taxes – hardly a way to live in style! That income is less than 80% of the average U.S. household income. The millionaire group also isn’t that unique or rare in America. There are an estimated 10M households who have a wealth level of $1M or more.

Thorp also used the Forbes 400 list and Vilfredo Pareto’s “power law” to estimate the number of U.S. households at each wealth level. It is fun to peer into the wallets of this rarefied group of Americans:

Before reading, this I thought I knew or had met a lot of rich people in my life. Laughably some consider me “rich.” It highlights the relative nature of income and wealth. It is fun to peek behind the curtains of our rich neighbor’s bank accounts, though isn’t it? It is much like slowing down to look at a car accident. We can’t help ourselves no matter how much we may not want to be a voyeur.

Those Evil One Percenters

This also brings up the issue of “the 1%.” There was a political backlash against this group after the 2008 financial collapse. Just who are these 1% and how much clout do they have? The top 1% of households – assuming 125M U.S. households – would represent the top 1.25M households. Per the above-mentioned power law and data that wealth level is 4M. Are you in the 1% based on this? If so, congratulations! You likely have reached financial freedom if your spending is reasonable (under 13K per month. (4% of 4M = 160K/year). Nevertheless, as you are undoubtedly aware, you do not have much political clout.

It is the top 0.01 percent who wield power. As an elite hedge fund manager, you may be able to get Congress or the IRS to consider some of your income capital gain (lower tax rate) rather than ordinary income (highest tax rate). Senior politicians will return your call and give you their ear. That provides invaluable influence. This elite group represents 12.5K households. They each have >$125M. Now that is rich by any measure!

Now, let’s get back to you and me.

Dad, Are We Rich?

My kids have asked me, “Dad, are we rich?” How should I answer that? I don’t want to say yes since I don’t want them going around bragging how they are from a rich family. Plus, I grew up poor and still have some financial insecurities. No future is guaranteed. Besides, I don’t want them asking for more presents and trips thinking that they deserve to be “spoiled.”

I don’t have the answers when it comes to great parenting, but I’m sure I can answer the question objectively. The answer is yes, we are rich – at least on a world scale. We are lucky to be not just in a developed nation but in the USA where per capita income is high and taken for granted.

During a typical day, we tend to hang around other “rich Americans” or other “rich doctors.” We don’t concern ourselves with the indigent in rural China or India daily. We get a skewed view of the world where most of the people we associate with have beautiful homes, cars, educations, and vacations. The basics like health care, comfortable housing, indoor plumbing, reliable roads, and stable electric power are always available and taken for granted.

How do I know we are rich? Well, let’s say you are the average American household or a resident. You feel you can barely make ends meet. You haven’t saved much for retirement and can’t afford the vacations and cars that your neighbors have. Nevertheless, you make 60K per year. What is that on a world-wide scale? Well, you are solidly within the top 1% in the world. 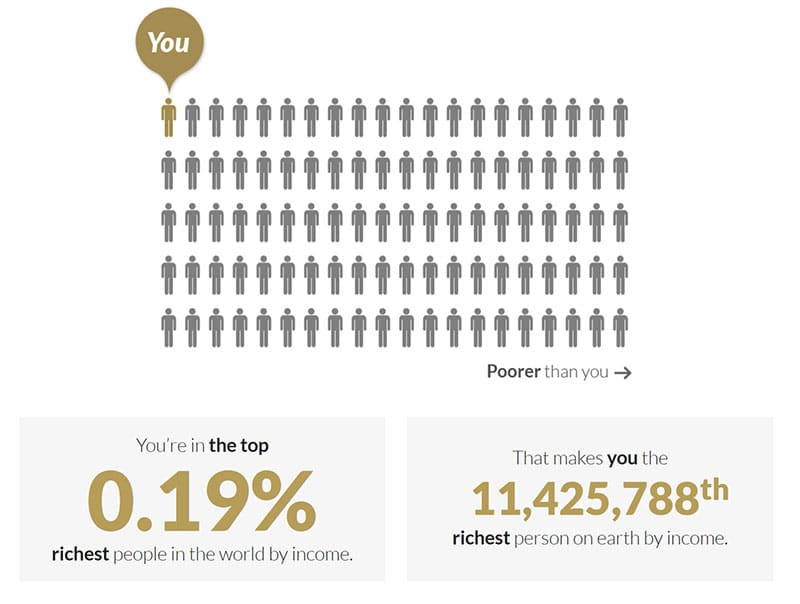 What about a primary care doctor making 200K? You may feel poor since your friends in subspecialties seem to have an infinite amount of cash for big houses, new cars, country club memberships, private schools etc. You must work long, hard hours just to maintain an upper-middle-class lifestyle. Although that comparative pain is real, consider where you are on the global income scale. That salary puts you in the highest earning segment in the U.S. (top 5%) and even more so on the world scale (top 0.04%).

These numbers are based on income. Using net worth totals usually yields similar results.  Type in your numbers here and see where you rank. I’m betting you will be surprised at how rich you already are.

So, what do you think?  Are you rich?